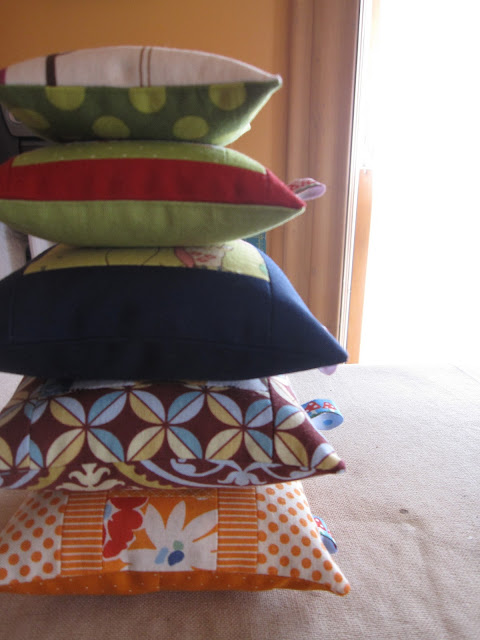 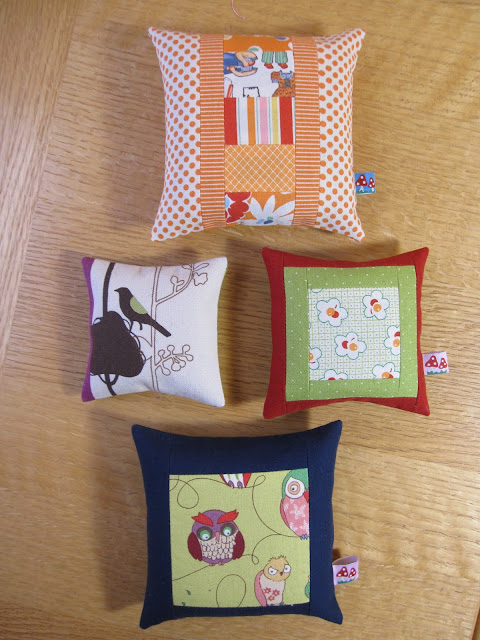 There's something so satisfying about making itty bitty things. I have a million tasks on my to-do list today - grocery shopping, pumpkin carving, bias binding making (aack!) - but all I really want to do is make tiny pillows.

Happy W.I.P. Wednesday! What are you working on this week?

Reality has finally sunk in. I'm doing my one and only craft sale of the season, Handmade Arts from the Heart, on November 12th and that's like super close!! I, ahem, just started sewing for it this week. This week will be all about bunting banners. My goal is to have 20 ready for the sale. Four done, sixteen to go. No sweat... 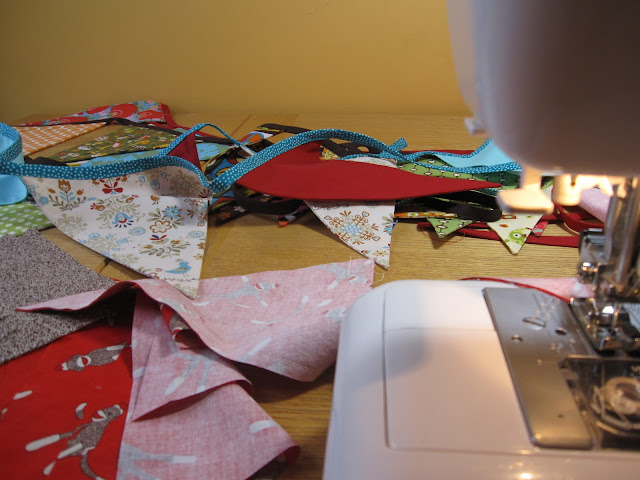 Happy sewing!
-Annik
Posted by Annik Miller at 9:31 AM 3 comments:

Hello dear blogosphere friends. I've missed you! How have you been? Are you working on Halloween costumes? Making holiday crafts? I'd love to hear what you're working on.

Last time I posted I was working fiendishly and feverishly on my Modern Quilt Guild Kaufman Kona Challenge. And then, a real fever struck. One day before the official reveal date of our Minneapolis guild's projects, I woke up with a nasty sore throat. A fever followed a few hours later and by noon I had a positive strep test to confirm my fears. So, the quilt did not get finished. I didn't attend the meeting, either, despite so looking forward to it :(

Here's a little peek at my Kona Challenge quilt: 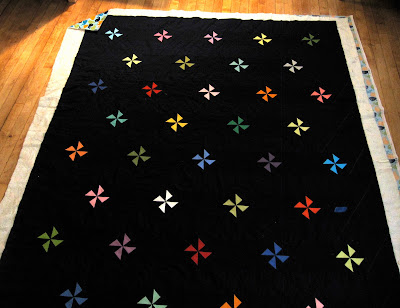 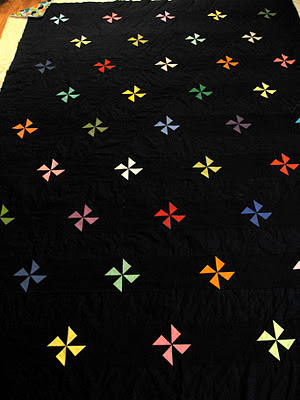 The photo are very dark, but that's for the best because it hides a little problem.  I used Kona navy as my solid but ran out (another lesson - figure out how much fabric you need before you start sewing/piecing!). I went back to the store where I bought the navy, knowing I wanted the navy off the same bolt so the color would be the same. No luck. There was hardly any left on the bolt. So I drove 40 minutes to another chain store (to remain unnamed) to find more navy. They had the 4 yards that I needed and it looked the same as my original when I was in the store, but when I started piecing it was very clear that they were not from the same dye lot. Aaargh. Deep breath, let it go.

This quilt has been a good lesson for me to roll with it. Not everything has to be perfect. At least that's what I keep telling myself. Besides, it's for the boys to use and abuse. I hope it gets lots of love. And you know, I'm pretty darn proud of making a twin size quilt with half (!) of a charm pack.

I've also been working on a Halloween costume for my daughter, Gwen. She's 2 1/2 and has requested to be a princess. Amazing, isn't it? Are girls hardwired this way??? Secretly, I've had a blast making her costume - please don't tell. I'm surrounded by sparkly pink fabric and I love it. So far I've made a layered tulle skirt and a puffy sleeved top.

Gwen will wear a pink shirt under the sparkly magenta puffy sleeved tee I made. A pink silk satin ribbon sash with complete the look. And yes, leggings are a must. Time permitting, I might even make her a robe/cloak with a fake ermine collar. My dear son Alex, 8, pointed out that she doesn't have a tiara. Better get right on it. Yes, I've gone bananas.

Did you read my post about the Marimekko print that got away? I still don't own any vintage fabric happiness, but I did score a dining room table and chairs this past week! The table is solid teak, made in Denmark, and weighs about 10,000 pounds. It's lovely. 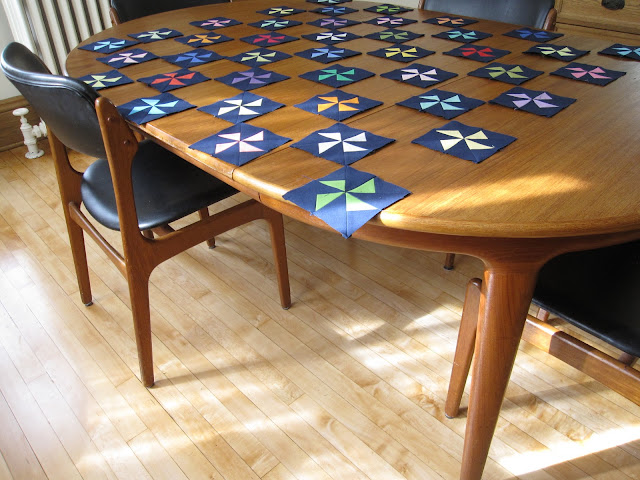 And what are those pinwheels, you ask? That's my Robert Kaufman Kona challenge in progress. 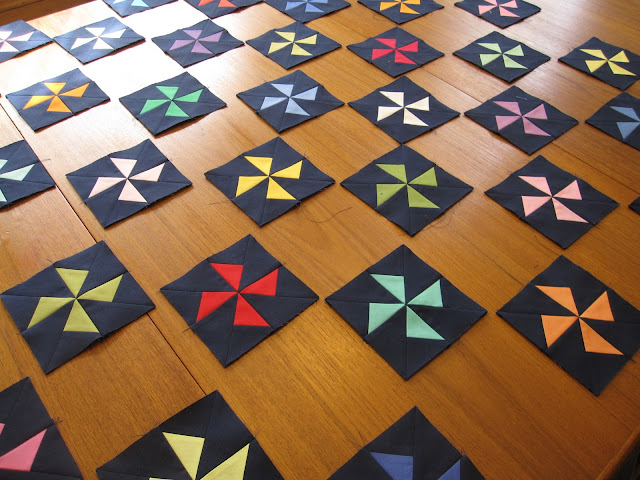 A minor miracle will be required for me to finish this quilt by Thursday.  I was planning to sew all weekend, but sadly, my daughter developed a high fever out of nowhere (104.1 last night). Today is all about snuggling and taking care of my girl - quilting will have to wait. Whether I finish my quilt or not, I'm very excited to see what the other Minneapolis Modern Quilt Guild members have made with their charm packs!

The Marimekko that got away

When I first started my search for a new (antique) dining room table and chairs about 18 months ago,  Danish teak furniture listing on Craigslist were plentiful and the prices were low. Lots of listing came up, but I couldn't make up my mind, or there would only be four chairs instead of six (I need a bare minimum of five). I wanted rope seats because they would easy to clean, so I passed up beautiful sets with upholstered chairs. Clearly I was not the only one searching for mid-century teak furniture because I noticed prices started creeping up, posting were less plentiful, and were mainly from dealers instead of adult children trying to unload mom and dad's old stuff. But I continued on my quest, undeterred.

About a week and a half ago I was doing my daily cruise of Craigslist when I came upon a posting for an estate sale. The first item listed was a GORGEOUS teak dining room set which included eight chairs with the original leather upholstery. I clicked on the estate sale company's link to see photos of other items that would be available at 9 a.m. the next morning when the sale started. One photo caught my eye. There was an ugly yellow naugahyde loveseat, and hanging above it was a fabric print on stretcher bars. The print featured bulbous waves in various shades of blue. It was totally my color and style. I knew then and there that I had to have it.

Saturday morning I took my time getting ready. Having never been to an estate sale before, I didn't know what to expect, but I figured I should get there early. I pulled out the booster seats in the minivan, completely assuming I would be driving home with that fabric print, if not a new dining room table and chairs.

I pulled up to the first ring suburban house at about 9:30 and (miraculously) scored a parking spot right in the front. This had to be a good sign. I walked up to the front door, amazed at the number of people there. Within minutes of entering the house, it became clear that all of the furniture was sold. Okay, so the dining room table wasn't meant to be mine. I could live with that. I made a bee line to the basement stairs knowing that the blue print had to be down there.

There it was on the wall. It had no price on it, but no sold tag, either. I gingerly pulled it off the wall and started scanning the back. An original Marimekko print from the late 1960's.  My heart was racing with excitement. It was in pristine condition thanks to spending a lifetime in a basement with no sunlight. No blemishes, no rips, just a little dust. And it seemed to be mine! I dragged this ENORMOUS canvas up the narrow basement stairs all by myself, dodging fellow estate sale shoppers. This thing must have been 6 feet long and about 3 feet high. Let's just say it wasn't my most graceful moment.

I was up the stairs and heading to the pay station when this guy looked at me and said "that's sold - and if not, it would be mine." Who bought it, I asked? "The blond woman with the red-haired kid" he replied, "and it's for sale." Then I asked him if he knew how much she paid for it. "Twenty bucks." I was felt sick to my stomach.

Seconds later, I found the blond woman with the kid. I ask her if the fabric print was for sale. She said yes, but not right now. She needed to do some research on it - figure out its value. She didn't think it was a Marimekko (so she knows nothing about fabric and checking selvages). She told me it was her son (maybe 12?) who picked it out. He thought it would make a good headboard (OMG, please don't turn it into a headboard!). My heart sank. I wasn't going to get the print today (or probably any other day).

The blond haired woman turned out to be a vintage furniture dealer I already followed on Facebook. She told me she spent the night in her car (it was in the 30's that night!) and was #4 to get into the sale. She wanted the dining room set, too, but it and nearly all the rest of the furniture was sold by the time she got in the house. Yowza! I left the estate sale empty handed (even though I should have bought the Denby set and a solid teak dresser that were both a steal), disappointed, and a little bit disgusted by the whole idea of vulturing over deceased people's stuff.

As I drove away, the Marimekko was strewn in the grass despite the morning dew and sunlight.  Would I have gotten the print if I had arrived at 9 a.m.? And how I lamented the injustice of it now being owned by someone who didn't truly love it or appreciate its value and design history. During my drive home, between deep calming breaths, I realized it's just stuff. For the last 39 years I've been absolutely fine without a 6 foot long Marimekko print. Did I mention it just happened to be my 40th birthday? 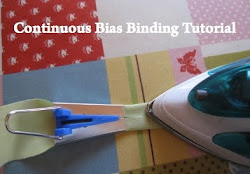 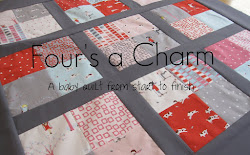 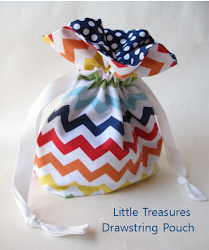